It’s a dark time in the world, and I find myself musing on the last time it felt this way to me.

Because, yet again, someone is afraid and has the power to express their fear in violence.

The last time I felt this way was during the bad old Reagan years, the years when I had a suicide plan for every contingency. The years when I felt SAFEST when I lived in San Francisco, which meant I was so close to a nuclear target I was probably going to die in the first strike and not have to live through the beautifully-named but deadly nuclear winter.

I flirted with Death and She loved me hard, but not as much as Others . . . and so I lived. Scarred and scared and maybe, just maybe, it was so I could feel it in my bones that this time felt like that time.

But Reagan seems logical and normal and effing EASY compared to shite going down now. I mean, we’ve got a woman running for presidency . . . oh damn, we did back then, didn’t we?

The suicide rates (one way to examine how a society is doing) were going up, up, up. Especially among men, victims of the economy, the war, PTSD, drugs, the pain of life that was grinding them down into small creatures, and then *POP* in the early 90s, things got better, and eased off, and then basically stabilized, even dropped a bit . . . Until now, when the rates are back to increasing like planes taking off. Men and women both and in ways that are a lot more lethal the first time out — firearms for men, poison for women.

It’s a dark time folks. I don’t know whether I’m nuts for wanting to be optimistic — it worked last time — or whether I need to run for the hills.

My husband pointed out, reminded me really, that the last time “they” pushed the national conversation about marriage equality was back in 2004 — and us (right-minded) folks got excited, and then deeply depressed as the notion resoundingly flopped and was dismissed. But it didn’t. The seed was planted and here we are, 12 (SHORT, really) years later and it’s a FEDERAL LAW.

So, yeah, there are pockets of pus, screaming and acting out in fear. They are enacting these stupid laws because things ARE changing. No need to talk about transpeople, they knew their place (or some such bs). Just as once upon a time there was no need to have a ‘race conversation,’ — black people knew their place. (And, lets be clear, there wasn’t even a recognition that there were other PoC than blacks.)

And yes, racism is alive and well and systematic. But it’s not the ONLY way, and there is a lot of shouting and people saying ‘this CANNOT be’ . . . and change is happening.

Priestessing is about manifesting change, and at the last full moon I welcomed Scorpio’s energy into my life and asked her for transformation — for myself, and for the world.

So I guess I’m not running for the hills. 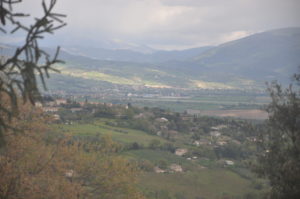