Last night we handed in our earnest money for a new house. Today we’re looking for a home loan.

It all started Sunday when we went out to look at a new development being built a few miles away. We do this every 6 mos or so, just as an exercise in checking out what’s available. Its a great conversation starter about our goals and expectations.

We found a great home, of course. But things got serious ONLY when we were offered the deal of a lifetime: no $ down, no closing costs, a 30 yr fixed rate loan at 5%, and no PMI.

The kicker, of course, is that we need to sell our current home. We’re going to sell for less than the appraised value, and are willing to make a wide range of deals to get this place gone. It’s a gamble.

My prayer for right now?

If it is not meant to be, make it fail.

Clearly, we didn’t have enough to do.

First of all, I seemed to get a bit of an infection that required antibiotics. This was on Wednesday, chemo day. I absolutely had a brain freeze and just didn’t think to tell my oncologist (yes, I know — stupid of me) until Thursday evening. (Thanks to my mother for politely pointing out that I needed to make that call immediately.) So I spoke with the on-call oncologist and he insisted I come in for a consult the next day.

END_OF_DOCUMENT_TOKEN_TO_BE_REPLACED

I have one simple addiction that has haunted me my entire life . . . 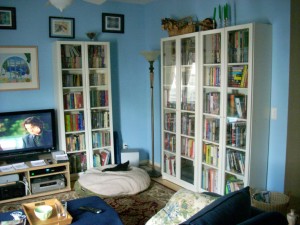 These are about 1/2 of my shelves. I own approximately 1500 books — greatly reduced and purged into those that I truly love. (When I moved cross country 16 years ago I mostly shipped 3000 books.)

What can I say? I love books and I love to read. 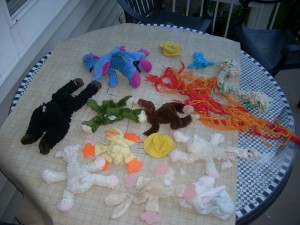 Here is our outside table, covered by our dog’s toys. (Occasionally, I take them, wash them, and dry them in the sun.)

In fact, I mentioned earlier that I was worried because I had a blood draw about 10 days ago and the number was VERY low (2.5). The MA said that I’d likely have to do a course of Nulestra (which forces the bone marrow to produce white blood cells). I don’t want to, at the least because it’s painful.

So I’ve been visualizing little factories in my bones, producing wbc’s at a high rate.

No Nulestra for me. We are good to go for the final chemo session on May 5th!

Now that I am seriously bald (there’s just a light shadow of hair . . . sort of a 5-o’clock thing) I’m strongly contemplating doing a mehndi tattoo.

For those of you who don’t know, mehndi is a temporary process that uses henna to stain the skin, usually in intricate patterns. It’s from India, and is a part of their celebrations, eg wedding parties will often be tattooed as part of the festivities.

END_OF_DOCUMENT_TOKEN_TO_BE_REPLACED 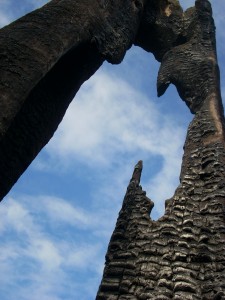 Seriously, it’s been a great week.

I walked Sasha twice a day, for 15-20 mins each time. But that’s sort of baseline (at least on non-chemo days). I also got out my tapes and lifted weights as part of a routine for the first time in months. It feels great.

I have to laugh at myself, I’m so weak. My ‘heavy poundage’ is 5 lbs and I don’t last longer than 20 mins. But it is a huge step forward.

I feel so good. My vitality is back, I feel healthy again. It is amazing.

The Queen of Denial is not me. Oh, I’ll joke about it occasionally, but really, I’m incredible perceptive and accurate in my assessments of myself and the world around me.

The Queen of Denial is this woman: Dr. Desiree Pardi (the link takes you to the original story on the New York Times website). In a story full of horror and woe what comes through the most is the irony. A doctor specializing in palliative care puts herself — and her family — through a year of increasingly horrible procedures and pain because she refuses to admit that her cancer is not curable.

This is the horror of breast cancer, and it is not my story. It is, however, a story about the pain that denial causes and the ripple effect it has on those around the denier.

This is me being judgmental, I know. But instead of spending $1000s on ever-more-complicated treatments, she could have been doing everything she ever wanted to do, spending time in beautiful locations with her husband, and giving her loved ones, friends, and colleagues a chance to say goodbye. Instead of saying “I’m a survivor” she could have said “I did great work and helped many people, time to move to the next level.”

Fear of death is a massively powerful force. It takes a great deal of courage to face the unknown and slip into it gracefully. Dr. Pardi’s story is the story of many people. Her story is not my story, not least because I’m not dying yet.

It is also not my story because I am not afraid of dying . .  I’m mostly interested in avoiding any pain around the process of dying itself. Oh, and I’d like to know when I’m going to die so I can get it all accomplished before I move on. 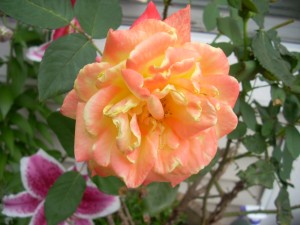 I am very much looking forward to May . . . when the sweet fragrance from this rose will once again fill my nose and surround me.