Last night J. and I went to see Heilung (link takes you to their FB page) at the Roseland Theater in Portland, OR.

It was an enchanting and odd experience.

They call it ritual. 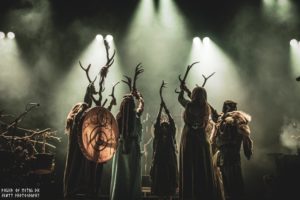 Never heard of Heilung? I’m not surprised. They are fairly new and until this year toured exclusively in Europe. But they are also almost exploding onto the music scene: their self-released first album, Ofnir, debuted in 2015, and they did their first live performance in 2017. So . . . you’ll be seeing more of them I predict.

One of the group’s founders, Kai Uwe Faust, is a tattoo artist specializing in Old Norse images. The other, Christopher Juul, is a producer, and the third is singer Maria Franz, formerly of the prog rock group Euzen. Growing up, each was drawn to their local “living history” Viking reenactments, which seems like a kind of local SCA movement in that participants create and wear authentic clothing and participate in period-specific pastimes. They call their work “amplified history.” 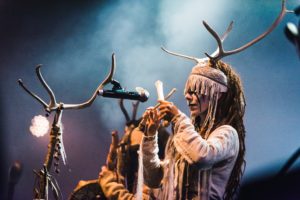 They call it ritual. 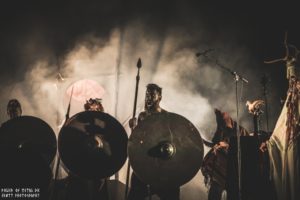 In an interview with Revolver magazine, Faust says, “We try to give a little spark of that emotion: to make people feel how it is to be surrounded by nature, to slaughter their own cattle, to build their own drum, to live from the Earth,” Faust says. “Every attempt to connect it to modern stuff that makes us sad is not important.” Their Youtube channel says, “We used everything from running water, human bones, reconstructed swords and shields up to ancient frame drums and bronze rings in the songs…. Every attempt to link the music to modern political or religious points are pointless, since Heilung tries to connect the listener to the time before Christianity and its political offsprings raped and burned itself into the northern european mentality.” 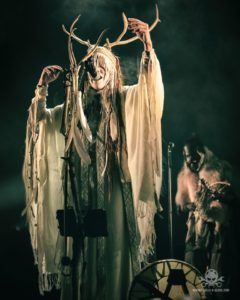 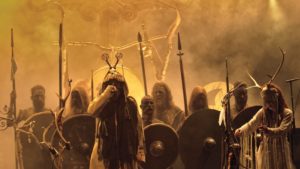 Few of the words spoken, sung, or chanted thereafter were in English. But that’s rarely a problem in music as its power is to convey a message without words. And I truly found the near-constant pulse of drumming and dull, throaty roar of harmonized voices thrilling. Franz’s voice is exquisite and hypnotizing.

Heilung did many things right, but the ritual failed to raise or shape, much less end, energy. One reason was that the crowd was there for the metal, not the ritual. Another was that I had no idea what was going on, what narrative was being — or attempted to be — shared. Visually beautiful, yes. Transformative? No. That whole scene with the bound woman was majestic and confusing — was it a metaphor for freeing Mother Earth? the release of women from the bondage of patriarchy? an example of how women can free one another?

I am very glad to have seen the show, and I predict great things for Heilung. Performance does not always have to be transformative, sometimes it can just be a great story.