He came to us just a tad over three years ago, having spent the last three months in a high kill shelter in Merced, CA, then in two foster homes. When he left the 2nd one he watched out the rear view window for hours. We didn’t know anything about him except that he hated cameras, it was really hard for the shelter to get pictures of him to post. The two fosters told us he was a sweetie and mellow, even low energy. They tagged him as an Aussie-Border Collie mix.

It was immediately obvious that he’d had little of the typical training. He could sit and lie down on command but otherwise didn’t know any of the typical commands. It was also clear that he hadn’t spent much time indoors: he tried to run through the glass patio door several times to get outside and screens baffled him. 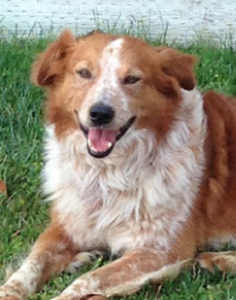 He was the outsider, rough and shaggy, with a scar across the right side of his face. His teeth were a wreck, some broken. He chased the cats and so dominated our sweet Sasha that she stopping playing and retreated to out of the way places. The house was miserable as we attempted to assimilate him. He bonded tightly to J. and began to try to chase me out of the bedroom if I went to sleep after them. He grazed my calf, nipping me. I’d never been afraid of a dog before then, but I found myself getting nervous, watching him overly carefully. He gave off a lot of signals of reluctance, but still tried to warn me off.

He’d been found by the side of a road and taken to the Shelter. No chip, no collar, and no one came looking for him, and we made up stories. He’d been the ranch dog for a cattle farmer, a pot grower, an itinerant worker. He got the scar from a bear, another dog, defending his man from wolves. He wasn’t fixed until his second foster home, so there very well may be whole hordes of his kids running around NorCal.

We spent time taking him to classes, training him. Group classes and privates, we worked on easing his dominance so Sasha would feel more at ease and training him to stop chasing the cats. (Particularly difficult since they were nervous about him and tended to be skittish. Any movement on his part would provoke a bit of running from them, which provoked his desire to chase.) At first he didn’t know what to do with toys and spent the time J. took Sasha to exercise in the field with a rawhide. Eventually he joined in, and then discovered the joy of playing ‘chase’ with a ball. That was the first day we saw Leo smile. From then on he loved to play, in the house or outside it didn’t matter. Leo was an energetic (FAST) bounder and leaper.

A bit more than a year after we had him, Leo lost control running down a hill at the dog park and crashed into a fence. He cut his face open and got 8 stitches, barely missing his right eye and just below his old scar.

Eighteen months ago we took him to a behavioral specialist because he’d just bitten my nephew and we were afraid of what he might do. Was he trainable? Can we make him safe? She worked with him for about an hour and told us he was extremely anxious. Like, off the charts clinically anxious; she gave us Prozac. At first we were chagrined: how did we miss it? Then, after a few months we realized how much mellower he was, and there were a number of signs that the drug was the right choice for him. We also started ‘crating’ him in J’s office at night. He’s still territorial, but I’m no longer afraid.

Kit started walking up to Leo and rubbing his chest with his head. Roland walks right by him without a twitch. Sasha lets him steal her toys and invites him to play*, and shoulders him aside when he’s in the way. The house is incredibly mellow. While he can’t stop sleeping in front of the door when J. is out of the house, he does occasionally sleep downstairs when J. is upstairs and doesn’t *always* follow him from room to room. 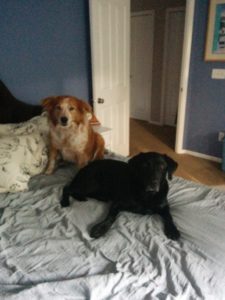 Our stories continued . . . we noticed that he looked like a pure ‘Red’ Aussie and maybe was a lot less of a mutt than originally thought. We made plans to take him to Ewetopia to see if he knew ranching calls and how he’d react to a ‘working’ environment.

A few months ago I noticed that he back left leg would . . . shiver . . . every once in a while. Kind of like when a dog is stressed and it just starts to shake all over? Liek that, but just the legs. We didn’t think much of it at first, but then it grew to be a daily event, and sometimes worsened. We took him to our vet and they couldn’t find anything wrong. We’ve been through this before, so we got a referral to our orthopedic vet. Dr. Fry looked him over and though maybe it was a pinched nerve, do an MRI to be sure.

Dr. Demuth of Summit Veterinary Referral Center gave us the news today: Leo was shot, several different times. He has buckshot in several places all over his torso. He has one piece of lead nestled right next to his spinal cord. He has a ‘fatty’ tumor in his right gluteus. There is a herniated disk right where the spine meets the pelvis. Leo’s sciatic nerve is processing impulses at about half the rate that is normal.

Yes, I know, it was years before he came into our lives.

Who shoots a dog?

All of our narratives have flown out the door. We can barely process the news that he won’t need surgery, that he’s not in pain, that Leo is basically really healthy and we just have to do some monitoring and palliatives to help him stay mobile as long as possible. It wasn’t actually bad news . . . it just left us upset and feeling awful.

Whatever Leo’s story, we know one thing for sure: he has his home, and he is living a great life.

*He still doesn’t know how to respond when another dog invites him to play.