About a decade ago a pair of swallows built a nest on top of the light on the porch of my apartment. They had babies and I got some great photos of them. 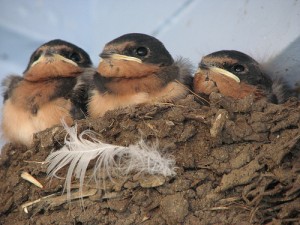 Most of you already know this, but just in case . . . .  The Wild Hunt, a daily collection of news of interest to the Pagan community is holding a pledge drive through November 22.

Jason Pitzl-Waters is honest and makes every effort to be objective while retaining a uniquely Pagan perspective. The Wild Hunt is one of the few community resources that remains fresh and ever-vibrant. Even a small donation is a show of support, and I urge everyone I know to donate something. I am, and I have major medical bills. That is how important I believe The Wild Hunt is.

On a more personal note, The Wild Hunt is one of the motivating influences for my creation of Facing North.

Yesterday was a banner day in two ways:

1. I was able to increase the time between meds from 2 hrs to 2.5 hrs. Without pain or discomfort.

2. I was able to go for a walk TWICE. The evening walk was especially beautiful. No rain, just very windy and it had warmed up quite a bit. The air smelled so good and fresh, it was intoxicating. The second walk left me tired, but invigorated.

I have begun dreaming again. I’ve been having ‘dreams’ almost every night, but last night was the first time my dreams were . . . shall we say? relevant? . . . When I begin to dream of myself as missing a breast I will know I have assimilated a new self-image. In the meantime, I’m talking to beings again and having colorful adventures. (I dream in color, generally.)

Today . . . today has been a joy, and it’s barely begun. I had a shower, and J. washed my hair. It was awkward and a bit messy, but I feel truly clean for the first time in a week. (I smell better, too.)

Sitting at a computer is still a bit of an effort. My mental acuity is fairly low, and my motor skills are also slower than usual. Not being able to move my left arm is more debilitating than I expected. Working around it often produces a cramp in the left shoulder, about mid-blade. One of my tasks today is to look into gentle stretching exercises I can do to restore full movement in the left arm.

I’m going to go for a walk while it’s not raining.

I’m briefly online, checking in on a few things (gosh golly, I made it until TUESDAY!), downloading email, and then I’ll take some time to read and respond.

Y’all have been wonderful and I am doing VERY well. Still can’t raise my arms above my head, and I’m keeping my left arm tucked tight most of the time. But pain meds (dilaudinum?) are working well, I’m eating gorgeous food (broiled salmon and broccoli last night, shrimp scampi tonight), getting lots of sleep, and watching lots of movies. (yay Netflix.)

More news coming as my coherency rate increases. Keep the energy flowing — it is WORKING.

First of all, my apologies for a slow update. I actually thought that I had pointed out my twitter feed, where I have been updating regularly, but as you can see I actually didn’t (until now). Sorry about that.

Fortunately, no news has indeed been good news. Lisa came through her surgery with flying colors. Both surgeons (the one who performed the mastectomy and the reconstructive surgeon) gave excellent reports right after their respective portions. Lisa was into her visitor-accessible room just after 8PM on Thursday. She spent all day Friday at the hospital, making good progress mentally coming around but not feeling up to walking yet. Saturday morning, her mother and I arrived in the AM to find her sitting up with her feet on the floor, pants on, reading catalogs, having finished her bacon & egg sandwich (!). She was done with being in the hospital, and those of you who know Lisa know the look that was on her face. 😀

So she’s been home since Saturday ~11AM and doing just fine, all things considered. The meds keep her mellow, but we’ve tweaked the dosages just a bit (less of the narcotic pain-killer, but more frequent) and she doesn’t get truly woozy. We’ve also added Tylenol to the mix with the surgeon’s blessing, and that seems to be filling in the little “gaps” in the pain management. She gets up and moves around on her own, although she still mostly stays in bed.

The extra bit of good news that we’re trying not to be tooooo excited about just yet is that the biopsy of her lymph node that occurred during surgery was negative, which indicates that there is no further cancer to be concerned with. The reason we’re not hopping up and down yet is that that was a “rough” test that has 85% accuracy; they then send to a lab for the more thorough test, which comes back in 7-10 days. The rough test is still pretty accurate, but since the chance is still out there we’re trying not to get ahead of ourselves.

Thanks to everyone for their thoughts, prayers, energy, and positive messages. It was amazing, actually, how my new smartphone (I’ve been completely phone-less in the cell phone era until ~a month ago) let me update people and share their sentiments with Lisa while we were in the hospital. Anyway, I’ll post again in a day or so as things develop, and don’t be surprised if you hear from Lisa before too long; she already couldn’t help herself from sitting briefly at her desk and checking mail. 🙂

Hi, Lisa’s “J” here. She’s been a champ so far. She’s been admitted, and had one serious treatment so far – a radioactive dye was injected so that pictures of her lymph nodes could be taken. “Amusingly” she had differing reports on the procedure. One nurse said “this will be the most painful thing you go through today” and another said “it won’t hurt a bit.” Fortunately, the latter turned out mostly to be the case; save for a little pain, all was well.

Now she’s back in a pre/post-OP holding room. She has a visit from the anesthesiologist coming up, and assuming no delays (not that safe a bet, really) she’ll be in the surgery process in an hour. I’ll tell you more when I know it. In any case, if you’re disposed towards sending positive energy her way, an hour from now would be a good time to start. She’ll appreciate it, and heaven knows I will.

EDIT TO ADD: she’s on surgery now and will be for another couple hours. All quiet on the western front.

As I ready myself for sleep, I find myself calmer, but still uncertain.

I’ll write more on this later, but I have been ‘sitting with’ the idea that this process is very much like that of being pregnant, and giving birth.(Which is why the ‘abandoned but still having the child imagery from J. yesterday was so particularly apt in the moment.) Like any soon to be mother, I have fears that can not be allayed.

Laffingkat said it well in her comment to me yesterday: I may never be sure, but waiting won’t help. Labor will be induced tomorrow, the only way out is through.

I feel strong, and supported. So many of you have stepped forward, old friends and comrades have written to say they will be thinking of me. Magic is being worked, prayers sent, and positive vibes sent. I am in as good a place as possible, and I feel it.

The next post should be from J. to let y’all know what he knows, tomorrow night or Friday morning. I don’t know when I’ll be online again (certainly not until I’m no longer on serious pain meds — although y’all might be heartily amused by my ramblings. 🙂

Until then — thank you. Thank you for your generosity, your care, and your compassion. My friends and loved ones have proven their worth and I am humbled and ennobled all at once.

I feel blessed, and that is a very good way to be in this moment, in this time.

Yesterday was a kind of a breakthrough day. Without going into *all* of the details, suffice it to say that the ‘pre-op’ meeting I had scheduled with my plastic surgeon wasn’t what I thought it would be, and I still had to go to the hospital for my bloodwork. Moreover, even though I had a 2pm appt., we didn’t get brought back until 2:45, and then we waited for another 15+ minutes — in an EXAM room. One chair, a padded table, and a sink in a cabinet. J. was forced to lean up against a wall.

END_OF_DOCUMENT_TOKEN_TO_BE_REPLACED

It’s been a tumultuous week, so much so that I haven’t felt like writing about it. I’ve been doing quite a bit of talking, however, as well as visualization and imagery manifestation . . . but let me tell this story in it’s proper order.

END_OF_DOCUMENT_TOKEN_TO_BE_REPLACED 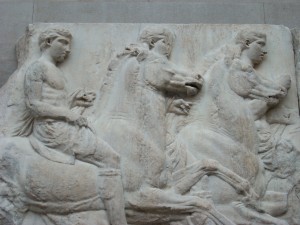 This image was taken at the British Musuem, April 2007. It’s a piece of the Parthenon and depicts a group of soldiers riding to battle.