I eat a lot of eggs for breakfast, pretty much every day in fact. During the week that usually means I’ve created some kind of ‘bake’ — veggies, maybe meat, probably some cheese, covered in an egg/milk combination and then baked until the eggs are set.

Lord love a duck, sometimes I just can’t take it anymore. I crave pancakes or waffles, even just toast.

But I’m going to share a secret I’ve been keeping since early October: I’m on a diet.  It’s called NSNG and is simple: no sugar, no grains. (See how that works?) All I did was eliminate every kind of sugar and grain from my diet: wheat, corn, rice, quinoa, Stevia, maple syrup  . . . all of it. Because I am also looking at being called pre-diabetic, I’ve also eliminated foods with GI numbers higher than 50 for the most part. So, no watermelon, or peaches, or potatoes. Yams are at 54, so I will let myself have them, and the other fruits and veggies are now my ‘treat’ foods. My dessert, if you will.

How’s it going? I’ve lost 5% of my body weight since I started. This is basically a miracle for me, since I have only gained weight over the last few years. Nothing was working, no amount of exercise did more than hold me where I was. NOTHING was getting the weight off. Now, before you say anything, I know that weight isn’t everything. The inches are coming off as well, particularly around my waist, which is a positive indicator for heart health going forward. I will be having blood work at the end of the year, at which point I anticipate being at 7% lost since I started.

How did I find NSNG? My sister, J. She did the Whole 30 regimen last year and found that it really re-aligned her eating and she shed about 30 pounds. Around the same time as my birthday, I was dealing with a bad case of depression about the fact that despite working hard for a year, my weight had only increased and my blood work was likely worse than when I was cautioned about becoming pre-diabetic. (As a relevant aside, my father was diagnosed as a diabetic about 5 years ago, so its in my blood.) J. and I had been looking at doing the Atkins or South Beach diet since those plans had good data about being very good for diabetics in particular. But we were balking at how difficult it would be. In particular, I was struggling with the notion of giving up most fruit. Then my sister J. sent me a cookbook: Happy Eating. I saw immediately that it wasn’t Whole 30, and that’s when she told me about NSNG.

So we gave it a try . . . and we both started losing weight. We weren’t hungry. Yes, we had/have cravings, but they are fairly easy to ignore. Especially when you can have basically anything instead of the sugary or grainy thing you were craving. For me, I really miss the ‘crunch’ of corn tortilla chips, so I eat celery, often with peanut butter. I often get hungry after dinner (which we often eat early, like 5pm) so I have an apple or orange and an ounce of cheddar cheese. Dinners are easy, just cook what you were going to, but take out the starch, unless it was a vegetable.

Even better, we occasionally have ‘off plan’ meals where we end up consuming some grain or sugar. We like to eat out, or share meals with friends, so if an item is ‘off plan’ we’ll negotiate how to best handle it. Like, have the fried chicken at our friends’ house, but skip the cornbread and have extra salad. Always pass on dessert, unless its plain fruit. But I still drink wine, and J. hasn’t stopped drinking his Izzes. As long as we don’t go too far off plan, we lose weight.

I can’t tell you how good losing this weight has felt. My goals are measured in forward movement:

Stress has a lot to do with my weight gain, and keeping it on despite healthy eating. There are additional steps I can, and will, be taking, but for now I’m focusing on changing my diet for the better. In fact, I’m not dieting at all: I’m changing my life. So, yes, when we go to Italy next year we will occasionally eat pasta, but we aren’t going to go out of our way to add pasta into our meals. We’ll focus on the meat, fish, and vegetables we’ll be served instead, and even the odd indulgence in a dessert now and then. It’s all about being able to enjoy life because we are healthy.

I started talking about breakfast, and here’s the recipe (as well as a representative picture) of that meal.

1 apple (I used a honeycrisp, but any of the sweeter varieties will work)

Chop the apple and sausage into 1/2″ or smaller pieces. Melt the butter in a nonstick pan. Add apples and cook until just starting to soften, 5-7 mins. Add sausage and cook until heated through. If adding optional ingredients, cook onion along with apples and add herbs just before sausage. Tabasco can be added just before serving. 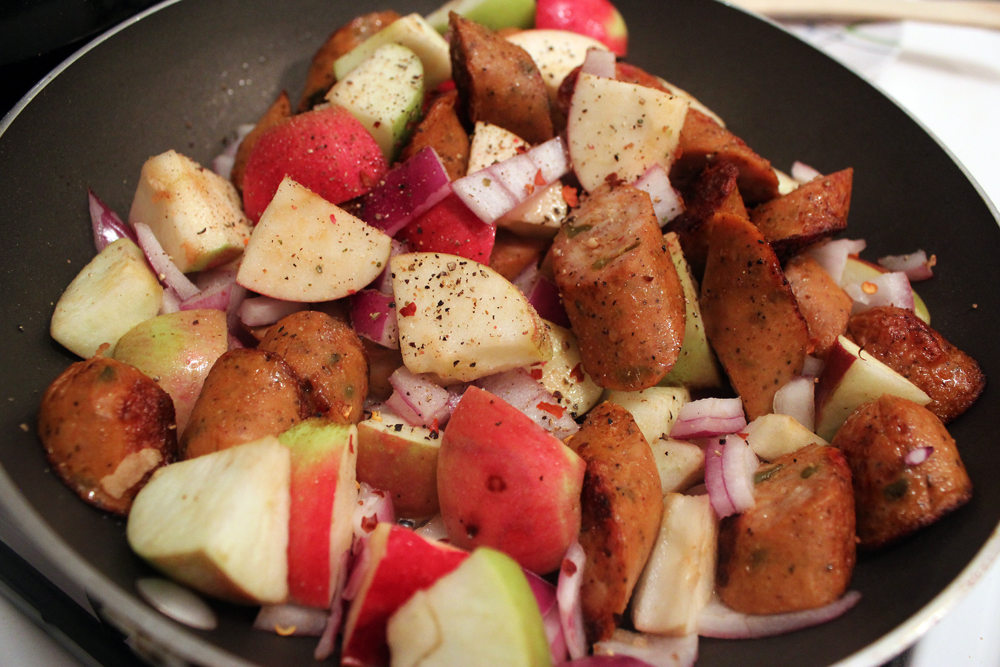 for more about NSNG, see this site: http://vinnietortorich.com/nsng-faq/