We had a massive thunder/lightning storm last night, starting at about 3:30am. It was a fast moving storm,  starting many miles away, just rumbles and small flashes of light in the clouds. But in less than 15 mins it was right overhead, with flares like magnesium flashes (remember high school chemistry lab?) and thunder as loud as a gunshot in the next room. 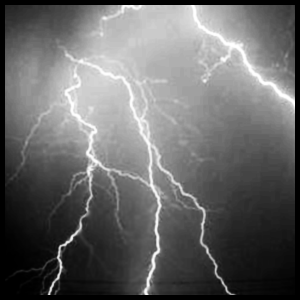 Sasha, normally as phlegmatic a dog as you can get (4th of July passed her by without a twitch) was seriously worried about all the noise. One thunderbolt had all three of us twitching in reflex — for her it ended as a dive down the stairs and out to the back door. Where she voiced her displeasure. The weather was so loud, I didn’t worry about waking the neighbors, but I didn’t want to encourage her barking at storms so I took steps to distract her.

Another quarter of an hour later and the storm had moved along, leaving behind a muggy texture to the air, flickers of lightning ‘over there’ a ways, and moderate thunder rolling overhead. So I took Ms. S for a walk and that was a great idea. She got to see the lightning and hear the thunder while also seeing me completely calm and unruffled. She ignored the lightning and only looked up at the sky during the thunder.

It was nature’s raw power in a way I had never seen before. Frightening and beautiful, all at once.

It was a good ritual — some real surges of energy at the right moments. (Always a good sign.)

We called the Lord and Lady in their aspects as justice bringers and visualized ourselves as becoming full of life energy to be directed at our purpose. When we were brimming full of that energy we placed our cause into an iron cauldron (dark and heavy with the weight of the injustice). As we did so, the iron was transmuted . .  slowly it became labridodite, the stone of many colors. When the cauldron was completely transformed, I grasped the rim and pulled. The cauldron unraveled into a rope of stone, shining with energy and shimmering colors. We handed the stone rope around the circle until we were all connected, then chanted to key the energy. When we were done, we threw the rope up into the air, where it dispersed to do our will.

We all then pledged to do something on the physical plane to support our cause. Write a letter, donate time, send money, SOMETHING, within this next moon cycle. So Mote it Be.

August 16th is the Full Moon in Aquarius. I’m beginning to work on my ritual framework and thinking about the energy and how to work with it. Full moons are always about fruition, big energy and hidden things revealed. Aquarian energy is al about visionary, intellectual ideals brought into the mainstream. Neptune is in Aquarius adding a note of transcendent awakening (this would be good energy for an initiation, in fact) and the suite of planets in Virgo (Mercury, Mars, Venus and Saturn) contributes their energy flavors of communication, action, romance, and responsibility to the theme of service.

This is the Full Moon to honor freedom, the blessings of humanity, and the desire for reform without harm. In direct contrast to last month’s ritual, this one is about shedding complacency, joining the best of humanity, and making positive changes in the world.

In this ritual I will write to my political representatives and speak my mind on various issues. I will also incorporate writing checks to my two charities: the ACLU and the EFF to support their endeavors on my behalf.

I’ve become attached to a new show on A&E — The Cleaner. Benjamin Bratt stars as Billy “The Cleaner” Banks a former addict who, with a team of three, rescues people from their addiction. Only four episodes have aired, and there’s a gap in new shows from now until Aug 19, but the early ones have been more than a little on the great side.

For me, one of the interesting plot devices involves Banks’ relationship with God. He does a lot of talking to god — not praying, he says, because he isn’t religious. Just talking. Some of it is pretty typical: “just do this thing for me, please, and I’ll . . . .” (God must get pretty tired of being told what people want.) But Banks also just talks things through. “Are you trying to tell me . . ? Because I’m not getting the message.” As a result of expressing his confusion, it seems that he gets an extra measure of feedback, which clues him in to what the right choice would be.

For example, in “Rag Dolls” he’s asked to take on a pro bono case and given a matchbook with what looks like a telephone number on it. He’s barely making expenses and is pretty much not convinced there is even a problem for him to look into (a mother ‘senses’ that her daughter is involved with drugs, but the daughter has passed three drug tests).  He ‘loses’ the matchbook, but it’s given back to him (“You dropped this Mr. Banks”) by — a nun. He thanks her, looks at the number again, then looks up and says something like “message received” and goes about handling the case.

This resonates strongly with me. A lot of what being a witch is about is perceiving the subtler messages the Deity sends. We’re sent messages everyday, throughout the day. Perceiving them *as* messages is the first step, acting on them the next. What do I mean by messages? Most people call them choices.

Every time we make a choice, we’re influencing our environment (including the people in it) and our selves. From smiling at the receptionist and saying hello in the morning (instead of walking by as if they are another piece of furniture, for example) to donating to charity. Meeting our love at the door with a kiss instead of a precis of the day. Spending a little extra time reading to our child before bed instead of catching the news. Our choices are our magic, and the Deity gives us lots and lots of opportunities to be just a little better than we were the last time — and just as many opportunities to turn away, or turn inside.

Most of our choices don’t have serious or obvious negative consequences. Few of us are in a position where taking a job could mean life or death for another person (as it would have for Banks), for example.

I would venture to say that most of the opportunities are unseen, however. It’s hard to be ‘in the world’ and remain open to all of the possibilities. Just dealing with the morning commute can be draining enough that you haven’t anything left. Negative coworkers can bring you down faster than any specifically bad news. Protecting your self against that commonplace negativity can lead to an automatic shutoff system settling into place anytime you leave your safe place. For some of us, the only safe place is the sacred space we create within our homes.

So the task is: expand our zones of safety and listen/look more carefully at our choices. Let the sacred in to the mundane and allow the transformation to begin.

Hey Technocowboy!  Look what I got in the mail today. And thanks, once again, for introducing me to really good modern fantasy (often called urban fantasy).

For those of you who don’t know her, Patricia Briggs is the author of the brilliant Mercy Thompson series. Moon Called is the first, and features a skinwalker (Mercy) a couple of packs of werewolves, a gremlin, vampires, and assorted other denizens of the supernatural. Mercy has smarts, guts, and a deep sense of honor. She’s one of the best female characters I’ve ever read, and in my top 5 protagonists. Tanya Huff was my first introduction to this genre, and she’s brilliant, but she got a little weird for me (and I get tired of protagonists who are too broken to be fixed) and I lost interest. Laurell K. Hamilton’s books are basically romance (although they get racier as the series’ develop) and I find that boring.

The other favorite is almost everything by Anne Bishop. How much do I like her? Let’s put it this way: I first read the Black Jewels trilogy (about 1000 pages) in February of this year. I’ve re-read it at least four times in the six months since then. That’s how much I like it.

The first harvest of the year, and the first ritual for this year’s class. It’s one of the (several) ways we are very different from other ‘Witchcraft 101’ courses. We believe that you can participate in ritual with very little preparation, that our ancestors didn’t have to work so hard on their spiritual life, but allowed the sacred n, and therefore were sacred.

Last night, we celebrated Lammas by recognizing the first feast of the harvest and giving thanks to the Lord and Lady for the gifts we received throughout the year. The gift of a friendship re-found and re-mended, of deeper understanding of the body and how to heal it, of re-emerging self-esteem, of the students themselves.

All while the sunset and my workroom turned to red and gold, we created sacred space and gave thanks.

May the feast of the first harvest bring you joy.

It started on Wednesday, and I have it still. That seems like a long time for a band of iron to be tightly wrapped around my forehead, doesn’t it? It got intensely bad last night, closely resembling what others have told me a migraine feels like. Nausea, throbbing head, light hurts my eyes. . . Ritual had to be rescheduled at the last second, and I hate that.

To be clear: if I get a single headache a year, that’s a lot. I’ve had caffeine, lots of water, food, aspirin, and sleep. Wintergreen (because peppermint gives me a headache) has scented my office. All in an effort to relieve the ache. Today I’m looking into deeper causes, and I’ll be at the doctor’s on Monday if it continues.

The National Headache Foundation (I didn’t know there was one, http://www.headaches.org/) defines a migraine symptoms as:

a dull ache and then develops into a constant throbbing and pulsating pain that you may feel at the temples, as well as the front or back of one or both sides of the head. The pain is usually accompanied by a combination of nausea, vomiting, and sensitivity to light and noise.

Um. Well. That’s it in a nutshell. Neat, something else to talk with my doctor about.