Failing to accomplish a long-cherished goal is crushing, and we’ve all experienced it at some time or another. In the aftermath of failure some of us beat ourselves up. Dripping shame and resentment, we polish our self-criticism and enact a terrible spiral of negativity. The spiral ends with a retreat to our comfort zone, the place where we know we can succeed because we don’t try to do anything new or difficult. 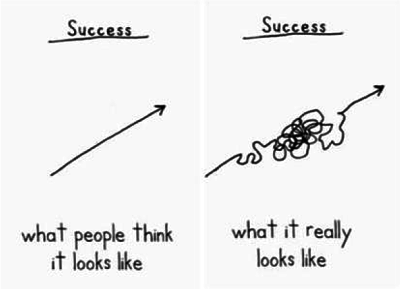 Within that negative spiral we focus on our mistakes, our failures, using them as proof of our lack of worth. Our external lack of accomplishments proves our lack of value and we prove that, over and over again as we compare ourselves to others.

The cold hard truth is that we are all failures.

It doesn’t always look that way. A major criticism of social media is that people us it to portray only the best things about themselves and their lives. Almost no one reports the argument they just had, the promotion not received, the vacation that went horribly awry. But life isn’t all smiles and sunshine. Every life is full of joy and woe, roughly equal in measure. Everyone suffers. Everyone fails.

Speaking of social media, perhaps you’ve seen a meme going around which asks: What would you attempt to do if you knew you could not fail? It’s a provocative question, one that causes you to examine your life and attitude, hopefully making you feel very uncomfortable in the process. I mean, if you can’t fail then nothing is holding you back, right?

Of course, it’s more complicated than that. Fear is primal, its hard-wired in to our systems so deep that it can’t truly be removed. And that particular question can lead us into a fantasy scenario rather than something practical that we can act on. (If I had a zillion dollars, I would pay every inner-city kid’s college tuition. Nice idea, zilch opportunity to be enacted.) So what if we shift the question slightly and ask: What is the worst that can happen if I attempt this? Followed by: How would I cope should the worst happen? In asking those questions we come to understand that although we didn’t get what we expected, it wasn’t a catastrophe.

Here are some things to consider about failure:

Instead of measuring ourselves against others and their achievements, we are best served by valuing our Selves; we are more than our accomplishments. Just as every infant is born into this world is a worthy human being, we are worthy just for being.

When we reflect upon our “true selves” (including traits we believe we have even if we don’t show them), we gain a greater sense of well-being and perceive more meaning in our lives. When we engage with others in healthy relationships, others generally view us positively – even though they might have different opinions or get upset about specific situations.

In knowing ourselves to the best of our ability and surrounding ourselves with people who build us up (instead of knocking us down) we can create a reality in which failure is simply a part of the process of becoming a better human.