This year seems to be focusing on life changes in and around work. It’s pretty stressful and I don’t want to talk about it yet — so I’ve been quiet.

But I have been busy with personal projects, notably re-working a number of Art of Ritual lessons that were bugging me. In this case, bugging means that they were fundamentally fine lessons, but flawed. I knew they could be better, but didn’t have a sense of how to make them better.

Last year, for example, I completely re-did the astrology lesson. Eight weeks of reading and calculations were re-written and condensed into half that time with a much clearer focus and (I think) level of manageability. We never meant to try and turn students into astrologers, just give them a sense of why knowing a sun sign isn’t useful. More than that, being able to impart the broader knowledge for self-knowledge and understanding. I really like the new lesson, and last year’s class seemed to get a great deal more than previous classes.

This year I tackled the rest of the divination classes: tarot, numerology, and runes. Numerology’s flaw was that it was too darn sketchy and didn’t place it into context with tarot, even though the main reason we teach numerology is because tarot interpretation relies so heavily on numbers’ energies. I revamped this lesson last, and it went very quickly.

Runes are more complex, and I was a bit stumped as to how to impart the essence of their knowledge to newcomers. Again, I tossed most of the previous incarnations’ reading and activities and focused in on the core elements of runes. Mainly:

I love the runes, and I think the new lesson imparts more of the joy of using them than previously — and I kept the cookie rune idea because it’s so fun. 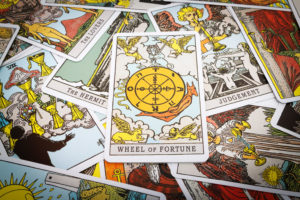 Tarot took me literally hundreds of hours. It was the first lesson I started working on, back in February. In the old version, students spent 22 weeks (starting in December) reviewing each of the major arcana, one a week. It’s a great way to get to know the Majors on your own terms and not because you memorized a little white pamphlet (thank you Mary Greer). But it’s also incredible tedious and the students just got bored with it being a ‘background’ lesson that no one talked about or referred to until we got to ‘part two’ a few months later and they actually started working with the deck as a whole. Big flaws, I know. (Also a lesson that was fundamentally the same as presented back in 1997.)

I spent a lot of time trying to fix the lesson, but ended up tossing the whole thing out entirely. Now students will spend a month on the tarot (along with the runes and numerology) with a quick introduction, a lesson on the minors and how they can be read based on key elements like the number and suit, a lesson on the majors, and then a lesson on reading the tarot. Fundamentally the tarot is best learned by using it, and re-orienting the lesson to get to that point made it much more fluid.

As part of the re-vamping, I created 12-20 minutes presentations (using PowerPoint) that capture the main information of the lesson in verbal/visual form. Hopefully that will reach a broader groups of learners. The reading is great for adding to students’ files, but is no longer required to the same degree as before. Each of the re-vamped lessons also includes more bonus materials, like worksheets for tarot card and rune keywords, to help them memorize the material. There are also links to some excellent blog articles where experts talk about various aspects, like Greer’s post about Pamela Colman Smith, and an article about the problem with master numbers in numerology.